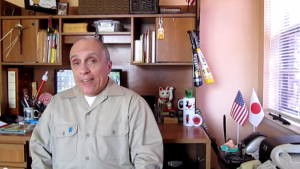 Much has been written about the Japanese comfort women from World War 2- it’s a controversial topic that’s at the core of ongoing tensions between Japan, South Korea, and China. But it’s a sad fact that women everywhere have suffered because of other wars. This page provides information on the Korean comfort women in Vietnam, women who were forced into prostitution during the Vietnam War, mostly by South Korean military stationed in the country at the time.

The video touches on other aspects of the topic, including thousands of abandoned children left behind, the “Lai Dai Han”, which is the Vietnamese term for half-Vietnamese half-Korean people.

Because this is a YouTube page, it’s familiar and easy to use.

This is a difficult topic to read about, so there isn’t much “enjoyment” there. It is, however, interesting.

Published by the “Propaganda Buster”, it imparts useful information that might otherwise never have come to light. For that reason, it scores high.

Recommended especially for those interested in Asian history, wartime politics, or women’s issues. One of the best things about the internet is how it’s able to shed light on topics that don’t get enough coverage in traditional media; this page accomplishes that.