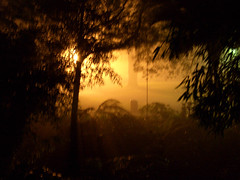 Reading Quantum Fog in one sitting would make you such an expert on factoids, you’d be able to beat that kid in Jerry Maguire with all the “Did you know’s” that you’ll be able to spew. Witty and informative, you wouldn’t think that the author is actually a father to a fourteen-year old who has problems getting up in the morning.

I’d have to commend him on the effort to put those little pictures beside each blog entry title, but the layout of the entire site is too scattered, you wouldn’t know where to read or to click on first. Adding to the text’s left-justified format, there are sidelinks both on the left and right portions making everything look even more confusing. At the end of each entry are advertisements without so much as boxes or partitions that would identify them from the entry it follows.

No problems here. Loaded fairly quickly, and the design/navigation combo was simple enough.

It’s an easy enough read with short and concise entries. The author has a knack for putting witty twists at the end of each that would prod the reader to say, “Hey, I didn’t know that.” Words used were simple and even in explaining complex stuff, the author preferred to write like he was just talking to a comrade.

It’s like reading a compressed encyclopedia or going to ebay. The author talks about a variety of things – from pop items to the social issues to the everyday trivial stuff. All followed by interesting factoids that could prove to be conversation starters in the future.

It was an enjoyable read. Once you start reading Quantum Fog, it’s hard to stop because you never know what you might find out in the end.