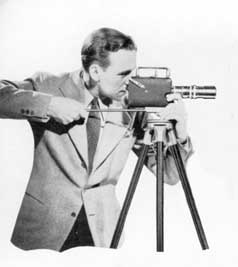 Rich Loffman is an independent film-maker in Japan, and his blog mainly journals the un-Hollywood-like realites of getting his latest project “Girl Alone” off the drawing board and into the screen.

For a media man, the site is surprisingly plain – dark, greyish tones with little done in terms of template-tweaking. The interesting photos however, add some spice to the entries.

Considering the large number of visual candy available – like video footage, photos and so on, I were treated to incredibly fast loading times all around. Getting through the posts were a painless experience, and the short posts should give even the most impatient readers a good feel of this blog.

As already mentioned, the entries are short enough not to become boring, and if you enjoy films (but don’t necessarily want to make them), there are a fair amount of readable bits and bobs about Rich’s daily travails. However, the visual add-ons and clips are really the most interesting things here, rather than the entries (well, he is a film-maker!)

Aspiring film-makers should learn a lot from this site, as Rich de-mystifies what it really means to make a film – from the script to production, and even the musical score – all on your own.

Struggling as a filmaker in a foreign land is an interesting topic in itself, and this, along with Rich‘s atmospheric film and sound clips certainly made me curious to see how “Girl Alone” turns out, and for that, I’ll be bookmarking this one.